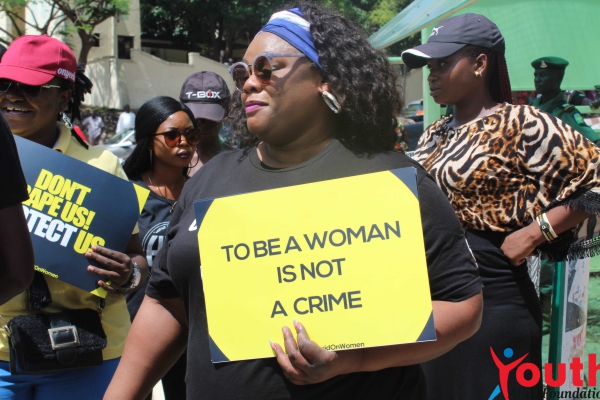 Over the past few weeks, Nigerians have taken to social media to condemn the alleged sexual abuse of a women recently arrested by police officers in Abuja. Social conscious individuals sense that for the larger part, demands for sex in exchange for bail by the Nigerian police is a clear cut violence against women. This is irrespective of the fact that they may or may not be Commercial sex workers.

Although The Nigerian constitution is vague on the criminalization of commercial sex, and given the questionable nature of the Police Force on indiscriminately arresting people and charging them for crimes without probable cause or proper investigations, many have questioned how the authorities may have reached the conclusion that the arrested women in the recent developments were sex workers.

In the light of this Youth Alive Foundation and other concerned Civil society organizations in Abuja turned up at Eagles Square on Friday May 10th 2019 to join voices against the raid of women by Nigerian Police. Placards, chants and speeches were all expressive methods that conveyed the fault in the Police system while crying for justice and compensation on the afflicted.

Youth Alive Foundation had over 15 member of staff present at the rally. This is to consolidate the culture of YAF supporting and creating an enabling society where the fundamental human rights of individuals are upheld above reckless abuses by law enforcement.

Speaking during the rally that ended at the Federal Capital Development Authority (FCDA) the Executive Director of Youth Alive Foundation Dr Udy Okon called for the issue to be addressed by Women’s legislators, the government and the Police.

There was an array of Placards with various inscriptions like:

Her today, it could be you tomorrow

To be a woman is not a crime

We will not be silence, we want justice and so on.

On the social media angle, the hashtag #AbujaPoliceRaidonWomen and #Sex4Grades trended on twitter. Tops Tweets were on:

We have demanded for justice for the women who were raped

We have demanded for the women abused to be compensated

Youth Alive foundation is consistent with standing against the victimization of the vulnerable, fighting for social justice that will also foster a less corrupt society among youths and citizens. It is a pressing problem to address social injustice at a time like this when we can surely make a difference against corruption of all sorts.