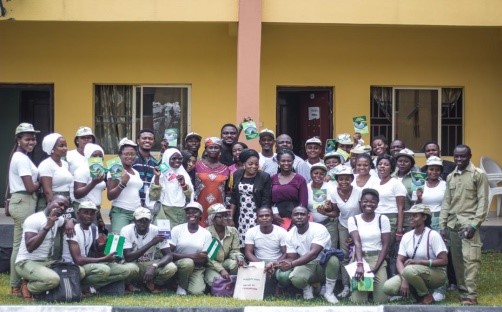 Anti-corruption CDS created in Epe courtesy Youth Alive Foundation (Lagos) in partnership with ICPC. On Friday May 31st 2019, YAF Lagos in partnership with ICPC hosted a sensitization program for about 100 Corp members present at the general CDS where 27 Corpers were selected and inaugurated to form the pioneer anti-corruption CDS group in Epe LGA.

The inaugurated Corpers took the oath of membership and vowed to uphold the tenacity of Integrity, they also promised to act as anti-corruption ambassadors during and after their service year. Corp members were pulled out from existing CDS groups to form the new Anti-Corruption CDS group.

The formation of the CDS group in Epe was necessitated by Y-PAC’s intervention plans focusing on Epe as a target community, it became critical to have the Anti-Corruption CDS in Epe, the group of Corp members will act as peer educators and mentors in their respective places of primary assignments.

The general CDS which started at 12pm with Mrs Afolayan who spoke on behalf of the Lagos state coordinator of the NYSC expressed how lucky the Corp members were to have the special CDS group in Epe, she shared some of the wonderful works the CDS group has been doing at the state level and urged Corp members to seize the privilege and make the best use of their national service year.

She then introduced the ICPC spokesperson who also spoke extensively on the expected activities for the inaugurated Corp members.

Mr Chamberlain who spoke on behalf of YAF received the Corpers and charged them to be committed advocates in the war against corruption.

The Corpers who were very much excited about the new CDS expressed their readiness to join their fight against corruption, they however asked that YAF should keep her support system close by and be ready to guide them along as they embark on this trip with the CDS.

Mr Chamberlain reassured the corps members that they will be empowered before sending them out on field as peer educators and mentors.

The inauguration was successful and the young CDS group constituted her leadership structure on this same date, also decided on their meeting days, the general consensus adopted Thursdays as their meeting days.