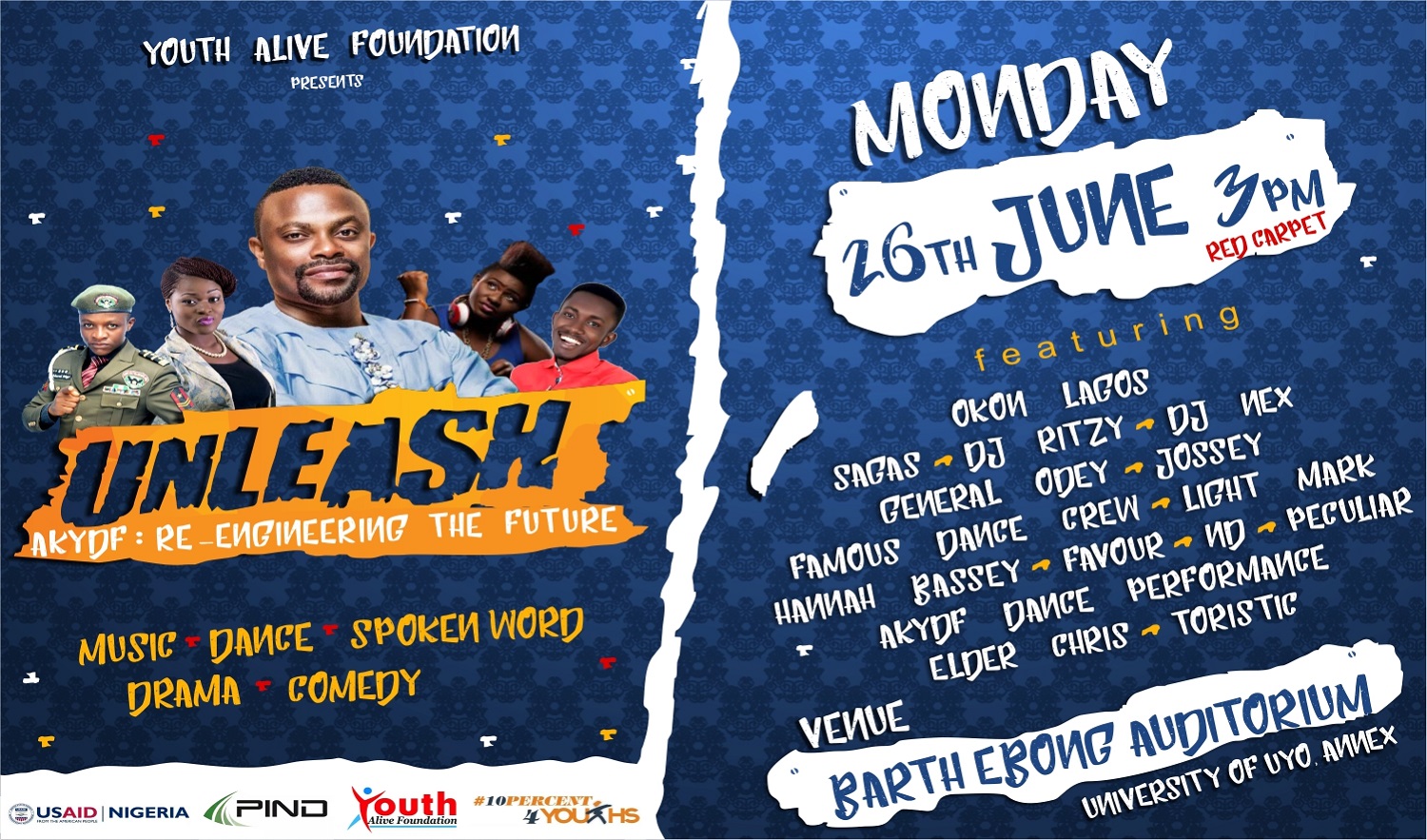 UNLEASH Concert is the new wave for the #AKYDFBill to create awareness through music drama, comedy  and dance for the urgent need of increased investment in youths of Akwa Ibom to be held in the University of Uyo on the 26th of June, 2017 by 3pm. The concert is birth to educate youths that are students on what the bill is all about and why it should receive a legal standing from the state legislative arm.

The youth advocacy cluster believes that creative expression is an effective medium for communicating and engaging youths and can be used to pass very important messages. This event, have assembled a line up of local artist to support the campaign that will be participating in the concert.

The event will however, host key artist who will perform in line with the #AKYDFBill theme. One of the most popular comedian and notable Nollywood actor from Akwa Ibom, Imeh Bishop a.k.a Okon Lagos who has accepted to be present at the event and an ambassador for the #AKYDFBill. It is expected that his presence will contribute to increased support and signups for #AKYDFBill.

DJ Ritzy, a local celebrity and female DJ will talk about the challenges of working in a male dominated industry to motivate female youths on how things would have been different for them f #AKYDFBill is implemented highlighting the 40% quota in the bill for female youths. Her performance will encourage female youths to take action to support #AKYDFBill since participation have been low.

Favor Eno is a female musical artist who is well known within the campus. She will be performing a #AKYDFBill theme song.

Kasala, the popular theater production in the state will bring a new light to the event in performing a dance / drama production that highlights the challenges facing youths in the state and demonstrating solutions that would work, therefore championing the #AKYDFBill as a key solution to youth unemployment in the state. General Odey, a popular comedian in the state with strong youth followership within and outside the campus will also contribute immensely to the awareness and his presence will attract youths to attend the concert and support the #AKYDFBill among many others to be hosted

On this note, #10percent4youths is not a vain hope. Itâ€™s the future for the youths and that future is now. You can take action now by signing up to support the campaign on the support page. For more details on the bill, download #AKYDFBill http://bit.ly/2qujPSE