THE BENEFIT OF #AKYDFBILL TO AKWA IBOM STATE. 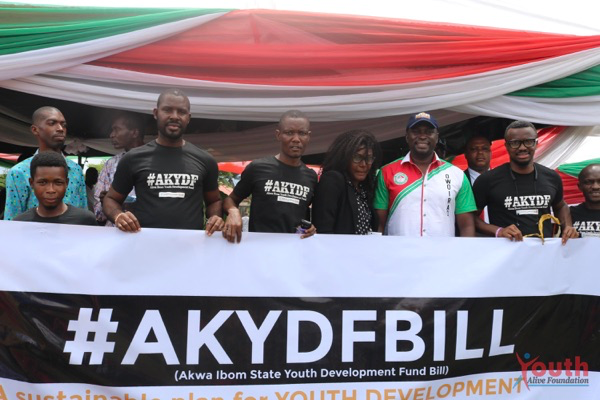 The AKYDF Bill is seeking for the establishment of a YOUTH DEVELOPMENT FUND set out by clear rules and procedures which would allocate at least 3billion Naira shall be provided for investment in youth development to be progressively increased annually.  And grants, subventions from National and Donor agencies for the purpose of youth Development and which Fund shall be operated and managed as provided by this Law.
ECONOMIC BENEFITS
With the #AKYDFBill, Akwa Ibom State would gradually become a less consumption prone state but a more production prone state.
#AKYDFBill would attract increased financial provision worth over 1 Billion Naira to the state to curb youth unemployment from the Bank of Industry, The Global Youth Empowerment Fund, ExxonMobil, World Bank, The UN-Habitat Urban Youth Fund, Tony Elumelu Foundation (TEEP), Diamond Bank’s Fund (BET) and Indigenous Angel Investors (This increased funding surpasses the current provision for the Ministry of Youths by at least 26.9%)
#AKYDFBill would contribute towards the increase in internally generated revenue (IGR) as youths who are now gainfully employed and own businesses can now pay their taxes and other state levies.
#AKYDFBill would bring about an increase in innovation trends across different sectors of the economy especially in ICT, Agriculture and Education in a competitive manner
#AKYDFBill would provide gainful employment and businesses start-up/growth for the over 80% of youths that constitute the working age population in Akwa Ibom sufficiently.
#AKYDFBill would attract increased private sector investment in the economy and strengthening of economic institutions as different companies seize the opportunity to expand their market among this large demography
SOCIAL BENEFITS
#AKYDFBill would help achieve the African Union’s focus of harnessing the demographic dividend through investments in youth
#AKYDFBill would adequately provide for the increasing youth bulge based on annual growth rate of 3.4%
#AKYDFBill would reduce the rural and urban youth unemployment rate of 9.8% and 10.7% respectively by more than half in 6 years
#AKYDFBill would ensure that the investment in youth development is PROTECTED as a legacy since it is backed by law and would require legislation to repeal for any reason.
#AKYDFBill would build and strengthen public trust between the Government and the Youths as the enabling environment is created for youths to thrive.
#AKYDFBill would contribute towards drastically reducing youth unrest, kidnappings, cultism and other social vices, making the state a safe haven for foreign investors and development.”
Download AKYDF Bill