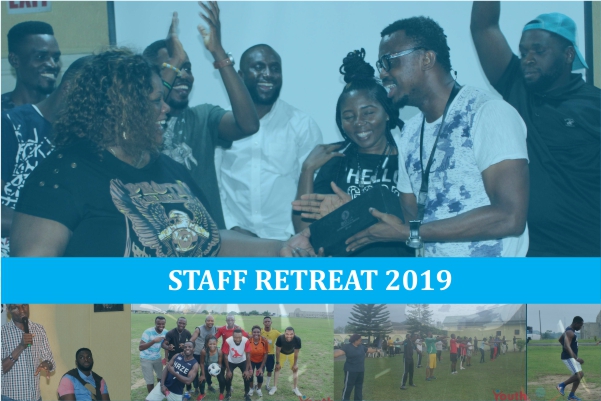 The YAF annual staff retreat is an important part of the organization’s strategy to promote staff bonding and generate new ideas for the year. This is pivotal to the staff’s harmony and productivity because as the saying goes ‘All work and no play, makes Jack a dull boy (& Jill a dull girl). Members of staff beamed with anticipation for this year’s YAF staff retreat which held in Akwa Ibom State, Uyo from the 21st to the 22nd of March 2019.

Staff and Interns arrived from YAF states (Lagos & Abuja) to meet with the rest of the staff based in Uyo where all assembled at EEMJM Hotel along Dominic Utuk Ave, Uyo, on the 20th of March for the 2-day activity packed staff retreat.

The staff retreat commenced with all staff showing up on the exercise field for aerobics led by Chikodi Onyeri. The 30 minutes activity was accompanied with music and had staff taking turns to display their dance skills. The Executive Director who performed last but quite splendid summed up the aerobics session. Staff dispatched to reassemble at 9:00 Am.

Once Staff were gathered again at 9 AM introductions from all staff commenced in the conference center of the hotel. Members of staff stated their names, roles and things other staff may not have known about them where a lot of interesting details of staff personal information were shared about themselves. After this activity, the Operations Officer of YAF; Mr Chris addressed the team on YAF’s core values being Unity, Integrity and Honesty which are key to upholding the organization and its progress which was followed by Mr. Chikodi Onyeri briefing the team about the foundation of YAF from whence it started in 1999. He stated that the organization had begun as a youth fellowship obtaining a formal Corporate Affairs Registration in 2002.

The Executive Director (Dr. Udy Okon) took to the floor to enunciate to the team the purpose of the staff retreats which is to inculcate the values of YAF and to drive cooperation and nurture interpersonal relationships amongst staff- all to an organizational advancement. She introduced the team to an activity in which staff were given a list of values and directed to write out their top seven (7) values hierarchically and the most corresponding values will be adopted by the organization in it’s 2-year Strategic Work Master Plan. Integrity turned out to be the most corresponding value.

Mr. Chamberlain (Programs Lead, Lagos) facilitated the next activity- the SWOT Analysis shortly after the game of Charade that tested team building and creativity. The SWOT analysis of YAF was extensively carried out were staff were paired in groups to identify the organization’s strengths, weaknesses, opportunities and threats which will be identified in the Strategic Work Master Plan. Some of the strengths identified include youth inclusion, the vibrancy and energy of youth in the organization while some weaknesses worthy of noting are the poor media visibility on our achievements and the issue of continuity in the absence of the Executive Director.

The second day of activity kicked off with the novelty football match on a standard football pitch. The previous day staff had been grouped into two teams. The game play lasted for over one hour with one of the teams conceding 6 goals.

As a follow up on the outdoor activity, the first indoor game was tagged -YAF Mission and Vision puzzle where representatives of the three YAF offices were to rearrange the puzzle to form the right sentences. This activity emphasized the need for staff to learn the organization’s mission and vision statements. The executive director conducted the next item of activity tagged Understanding Interpersonal Relations. Here, staff were divided into groups of 3’s and 4’s based on those who work closely together in the office to assess each other’s professional attitudes and deliberate on how to work better together. Five office issue scenarios were also given to 5 groups to find practical solutions; this activity produced valuable office issue resolutions after long discourse and generated policies that could be adopted in this regard.

A highly competitive spelling bee was anchored by Aaron Akpu Phiilip. A Lagos office winner emerged after a fierce 30 minutes of spelling close to a hundred words by all the contestants who were eliminated one after another. The YAF Awards Announced by Wisdom Hanson (Digital Media Coordinator) and Presented by the Executive Director Dr Udy Okon served to motivate nominees and awardees alike. Three different Awards categories named the ED awards were strategically presented at the discretion of the Dr Udy Okon unlike the rest for which winners were nominated by staff across the state offices.

Finally, the National Anti-Bribery Tweet Chat on Bribery in Nigeria was hosted by Wisdom Hanson and Chamberlain Etukudoh over a 2 hour period ranging form 6 to 8PM. Staff and other participants elsewhere used the hashtag #NoShishi4Bribe. This trended as the 7th most popular topics on Twitter for the day.

There is no doubt about the fact that the staff retreat is one we look forward to again next year. The balance of fun and learning cannot be overemphasized as key to productivity.