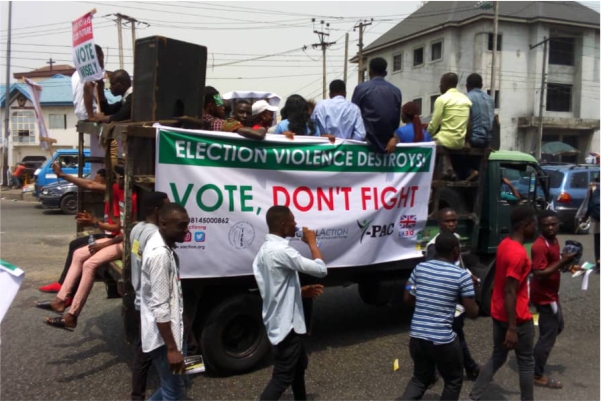 A Non-Governmental Organization known as Social Action in collaboration  with  other  Civil Society Organizations(CSOs), Youth Corpers, students of tertiary institutions  matched through major roads in Port Harcourt, Rivers state, Nigeria to emphasize on the need for peaceful, non-violence and malpractice free 2019 elections in the state and country at large

Speaking at the sideline of the rally, Peter Mazzi,  a  research officer in Social Action, said “People should come out with their Permanent Voters Card(PVC)  and vote on February 16th and March 2nd,2019”.

He urged electorates to be peaceful, non-violent and vote for candidates of their choice

The Social Action research officer said “do not kill yourself for any politician, no politician is worth dying for”

For his part, Green Isaac a Staff of Social Action said “no amount of money is worth your vote, do not sell your vote, your vote is your power, vote wisely”

A representative of Independent Corrupt Practice Commission (ICPC) in Rivers state, Livinus Okonkwo in his remarks revealed that the agency is doing everything possible to stamp out corruption in electioneering process.

He advised the electorates, political parties and their candidates not to indulge in vote trading.

He said “any one caught indulging in vote trading will face the full wrath of the law”.

Highlights of the events were the distribution of flyers by participants to road users and traders.

Revelation Agents correspondent reports that the rally started from College of Health Sciences at Agip flyover in Mile 4, Ikwerre road and terminated at Rumuola /Aba road.

The participants were carrying placards with various inscriptions like “Vote don’t fight, “wetin we gain, if we die for this election” among other things

Members of Civil Right Council, Rivers Civil Society Organizations, “We the People” etc all participated in the rally