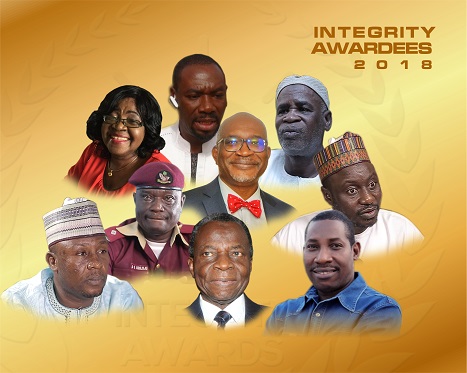 By: Wisdom Hanson and Bukola Agbeje  The Integrity Awards is an event hosted by the Youth Alive Foundation and a partnership of other civil society organization (CSOs) to recognize and reward exceptional citizens who have made outstanding contributions in terms of exemplary acts of Integrity. The goal of the Integrity Awards is not only to reshape norms that sustain corruption but also to build a new culture and consciousness that highlights integrity, selflessness and patriotism as hallmarks of Integrity.

Individuals eligible for nomination must be 18 years and above, resident in Nigeria must be law abiding citizens with sound moral character, must have undertaken actions that demonstrate outstanding integrity, courage and the actions must be verifiable.The process of selecting finalists is executed by a team of professionals who thoroughly investigate all nominations to verify and ensure all awardees are chosen based on actual portrayal of acts of integrity and meet the eligibility requirements.The maiden edition of the Integrity Awards took place on the 9th of December, 2018 to strategically commemorate the UN Anti-Corruption Day at the Chida Event Centre, Abuja where 9 awardees were honored and celebrated. See highlight on the video.Our purpose of celebrating these individuals is to influence a generation that has no hope for a corruption-free Nigeria. This will encourage other Nigerians to emulate.Below we will introduce you to the NINE AWARDEES FROM THE 2018 Integrity Awardees as we anticipate the 2019 edition.

Mr. Nasiru Salisu Zango is a reporter, whistle blower and an investigative journalist. Zango is an avid, fearless and courageous journalist and host of radio flagship program ‘Ida Ranka’ who believes in using journalism as a tool to effect change in the society & to compel the concerned parties to do the right thing.

CSP Francis Erhabor is well accounted for as a senior police officer with unquestionable character, who carries out his duties with all sense of responsibility, fairness and integrity.  He is currently the Divisional Police Officer in charge of ‘D’ Division, Itam Junction, Akwa Ibom State.

Hon Justice Isa Ayo Salami, PCA (Rtd), OFR, is a retired President of the Court of Appeal of Nigeria. He is a man of outstanding character and integrity known for his aversion to injustice, corruption, indolence and dishonesty. Justice Salami was unjustly suspended from office for refusing to influence the decision of the Sokoto Elections Tribunal. When he refused to do the bidding of the then Chief Justice of Nigeria, he was appointed immediately as a Justice of the Supreme Court with a view to remove him from office because he refused succumb to pressure, an appointment he refused. Despite pressures from various quarters to apologize for indicting the then CJN, he stood his grounds and insisted that the truth must prevail.

CRC. Ayodele Sikiru Aduloju studies Zoology in the University of Ilorin and describes himself as one who has always loved safety and saving lives, thus the desire for his profession where he has served faithfully for 20 years. Testimony from all Unit Commands he has served has it that CRC A.S. Aduloju is a man who does not compromise, incorruptible and an ardent advocate of integrity. He believes in consistency in values despite pressure or opposition.

Mallam Mu’azu M. Yusif is a Senior Lecturer at the Department of Political Science, Bayero University Kano (BUK) Nigeria. He is passionate and widely known as one of the few lecturers who are firm on principles and cannot be approached for undue favors from students and colleagues alike and an avid supporter and activist for the Movement against Corruption in Tertiary Institutions (MACTI).

Mr. Jafaar Jafaar is considered a man of integrity because of his doggedness and bravery for exposing corrupt practices irrespective of who is involved. He acclaims

his conscience as being his greatest role model in the profession and is mostly known for his primary role in exposing the corrupt acts of the current governor of Kano State, Umar Ganduje in 2018.

Ordinary (Dr.) Ahmad Isah is a man is passionate about human rights and justice. Through the instrumentality of Human Rights Radio, the only 100% human rights centered radio and TV station in Nigeria. He anchors programs aimed at fighting corrupt and unjust acts perpetrated in public and private sector institutions and intervened in numerous cases to ensure that unjust and corrupt acts are corrected without expecting any form or compensation.

Professor Faithwin Obomanu is a senior lecturer at the Chemistry Department of Rivers State University.  She is well known in the entire University Community as a highly principled, incorruptible, transparent and sincere woman. She has on several occasions been harassed and threatened for refusal to influence examination scores and on many occasions has feared for her life for refusing to change students’ grades for money and yet never succumbed to corruption.

Mr. Soji Apampa is the co-founder of the Integrity Organization (1995). His involvement with Integrity designing, resourcing and supervising program implementation has helped to make the strategy of “empowering people, their transactions, systems and institutions against corruption” relevant to Nigeria. Mr. Apampa was the team leader (international consultant) in 2006 for the World

Bank on the review of the Abacha loot repatriated from Switzerland. In 2010 he supported the Inter Agency Task Team in defining a process for the development of a National Strategy to Combat Corruption. For the last 15 years he has designed and implemented anti-corruption initiatives in Africa.

The second edition of the Integrity Awards promises to be better. WE already have a traditional date on the International Anti-corruption day (IACD)-December 9th Annually. As we gear up for the Awards, announcements for nominations will be made public soon. Do feel free to contact us for inquiries on 0818-888-5005 or on our official mail [email protected]