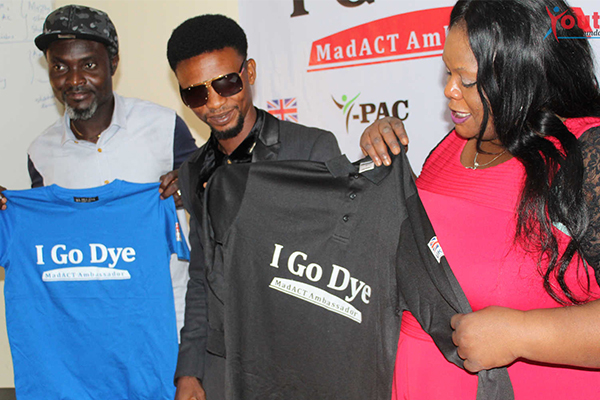 The Delta state born comedian also called on President Muhammadu Buhari to as a matter of urgency, publish names of

corrupt politicians, “so that Nigerians will know their real enemies”.

The comedian blamed Nigeria’s poor education and insecurity to the corruption.

“Today, the reason why some of us lost our parents, brothers and relatives, is because of bad healthcare and

that is caused by corruption. The reason our education system is bad and the reason why there is no light in the country is because of corruption.

“I believe that corruption is more dangerous than Boko haram and Herdsmen and for us to fight it, the president has to be more transparent to publish the names

of corrupt politicians. “He should not be bias, be it APC or PDP or any other party, Nigerians need to know their real enemies and

also yield their voices no matter how little it is, their voices can be heard” he declared. Speaking earlier, the executive director YAF, Uduak Okon, noted that I Go Dye has been vocal against injustice in the country. “So we need some people who are icons, who are influencers. I Go Dye has started calling on Nigerians to do

something against corruption, he has questioned the development in Nigeria, the deteriorating state of social infrastructure and he’s called for us to have a government that would work for us and for citizens to demand accountability”  Uduak noted. Dr. Okon said the foundation would be mobilizing youths against corruption in the country.

“We want to mobilize youth nationally to start a social movement and a reawakening on the need to do something about the state of corruption in Nigeria. If you trace the root of all kinds of social problems  in Nigeria, it boils down to corruption,” she added.