AKYDF; AN ANSWER TO UNEMPLOYMENT AND SUICIDE IN AKWA IBOM STATE 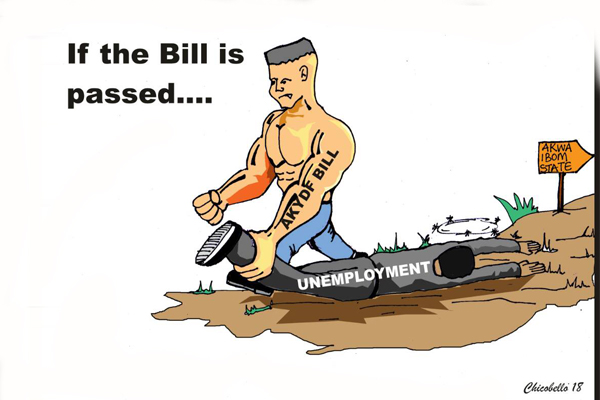 Nigeria has witnessed many horrible suicide cases within the past 12 months. This is happening shortly after the World Health Organization (WHO) survey which ranked Nigeria 30th among the 183 most suicide-prone nations of the world. Almost everyone is familiar with the news of the Medical Doctor who jumped into a Lagoon last year 2017. In spite of having a fairly balanced financial life and a promising career that would have saved him the spectacular dive into death, he chose to cut short his life, rendering his dependents hopeless.

It was as if the case of the doctor set a followership for series of other suicide missions- both attempted and committed. On April 8, 2017 barely one month afterwards, a man attempted to nose dive into a canal in the Festac area of Lagos. Then came the case of Hammed Olojo who was recently arrested by the Police and charged before an Ebute Metta Magistrates’ Court in Lagos for attempting to commit suicide by jumping into the same Lagos lagoon.

Recently a lecturer with the Kwara State University and a 300 Level student of the Abubakar Tafawa Balewa University, Bauchi took their lives. Subsequently news came up about a 20-year-old taxi driver in Port Harcourt who took his life by hanging. He was obviously frustrated probably because of the seizure of the taxi by the owner.

From jumping into the lagoon to hanging self with a wrapper, rope or even drinking poison, reports on suicide has become a more recurrent trend. Some gain rapid media attention due to the locality where they occurred while countless others that were not reported ended up wrapping the locales in shock and grief.

Just two days ago notice was brought to the social media about the suicide case of Solomon Obot. The will to let go of his live was severely vented around his frustrations. Solomon whose suicidal trait was noticed earlier last year got financial and moral support by friends to resettle in a different locality. His friends attempted to increase his chances of employment in the capital City of Akwa-Ibom by renting an apartment for him in Uyo. As was told by a close knit of the bereaved, he traveled back to his Eket home amidst a jobless situation and an inability to cater for his dependents. Few weeks later he stained the media with the horrid image of his tongue shocked out of a lifeless neck in a scattered sitting room.  This case might not be a rare one. A uniting fact is that joblessness, abuse of substance and its resultant frustration can speedily leap one into suicide.

In Nigeria the plague of unemployment is steadily worsening. It is even more cynical for a state as Akwa-Ibom with an abundance of Human capital, Natural resource and growing revenue to have recorded a rise in Unemployment. According to a National Bureau of Statistics (NBS) report, Akwa-Ibom state which in the past 18 months was the 2nd most preferred destination of foreign direct investment in Nigeria has also witnessed a growth in unemployment from 35.1 to 36.6 Percent in the last quarter of 2017. So in a state like this, young and vibrant members of the society with a gruesome loss of hope and confidence are prone to depression. Depression when not managed becomes a fertile nursery to plant suicide.

It is at a time like this that the government and other stakeholders should reconsider available options for combating the rising problem of unemployment. Many youths in various Organizations have already identified with the Akwa Ibom State Youth Development Fund Bill (AKYDFBILL) which could drive a lot of positive change around capacity building, Education, Empowerment, Skill acquisition, Employment and more. Its sustainability plan is a key driver to the reason why the bill merits consideration for a public hearing having gone through the first and second readings. There is no doubt that the Akwa Ibom State Youth Development Fund Bill (AKYDFBILL) will plunge unemployment and its resultant social vices (including suicide) to a decline. To read the bill follow the link below.